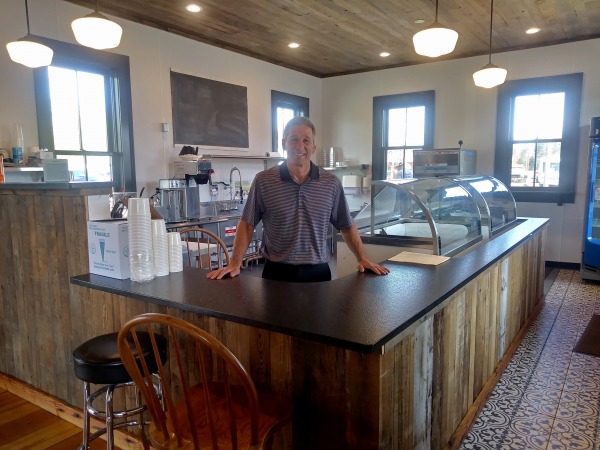 EAST LONGMEADOW – Two massive barn-style doors slid open on their original rails, revealing a floor-to-ceiling screened-in window on one side and the door exiting to a deck on the other. The natural lighting that flooded in revealed a black counter, shiny freezer cases, reclaimed wood flooring and dark beams on the vaulted roof. The building was once a train station, then a feed store. Now an ice cream shop, visiting the Depot at Graham Central Station is like a step back in time – but with all the modern amenities.“The goal was to keep it as close to the original as possible, while still making it somewhere people want to eat,” said Steve Graham, who co-owns the business with his wife, Jean Graham.

The building, which sits alongside the Redstone Rail Trail Bike Trail, was built in 1877 as a stop on the New York, New Haven & Hartford Railroad. The East Longmeadow Train Depot was part of a network of railway lines taking passengers from Boston to New York City and from New Haven, Connecticut to as far north as Lowell and Turners Falls.

After the railroad went bankrupt during the Great Depression, the building was bought by the Rintoul family and turned into the Community Feed Store. Graham said that in the 1950s, customers would come to get coal, hay, and animal feed at the store.

As time moved on and the feed store went out of business, the building sat unused for decades. Then, in 2010, the Grahams bought the building to keep it from deteriorating. In early 2020, they decided to create the ice cream business.

“My wife and I don’t have any food experience,” Graham admitted. The couple turned to Larry Passmore to run the operations as general manager. Passmore’s experience in the foodservice industry, including working for Friendly’s and Chuck-E-Cheese, made the Grahams confident in their choice to run the business. They have also hired an assistant manager and five employees to staff the shop.

After the results of an informal survey on Facebook asking whether the Depot at Graham Central Station should sell regular or soft-serve ice cream were fairly evenly split, the Grahams decided to sell both. They will offer ice cream in cones, cups, milkshakes and floats. The ice cream shop will also have coffee, tea and cold drinks for sale.

“People running by on the trail might not want ice cream, but a cold drink would be good,” Graham explained.

Originally, the plan was to open in June 2020, but Graham said that the pandemic set the project back due to contractors delays, material prices increasing and the Town Hall closing to hearings for a time.

When asked how much the renovation of the property cost, Graham laughed and said it was “A lot.” He continued, “This is a special project. It has the potential to be something nice for the community. We spent a little extra money to make it feel good when you walk inside. We have this opportunity to take a piece of property that wasn’t utilized for a long time and make it something special for the community.”

The refurbished building’s decor is filled with unique pieces of history and photos, loaned from the Historical Society. Four large coal-tending tools sit over the screen window and historical photos, letters and a train schedule have been blown up to poster-sized wall art. Above the ice cream counter, an original red and white sign recognizes the building’s former life as the Community Feed Store. “Bruce Moore of the Historical Society, he preserved most of this,” Graham said.

Even the new additions reflect the feel of the 144-year-old structure, such as the deck, made of rough-hewn red oak lumber from a tree that fell in Graham’s yard during a microburst two years ago.

While creating the ice cream shop has been a labor of love, Graham said that, from a business standpoint, it’s “A once-in-a-lifetime opportunity. It’s a centrally-located property in a neat little town. You don’t often find that in New England.”

Most of the seating is outside courtesy of wooden picnic tables and benches on the deck and in the mulched area next to it. Inside, once seating distance restrictions lift, there will be room for four tables. Graham said that the space would be great for private parties during off-business hours.

Graham foresees using the layout of the outdoor space and parking area for food trucks, a farmer’s market, car shows and live music on Saturday evenings. He even described a wintertime drive-through event in which people could get hot cocoa and see Santa Claus while surrounded by light-adorned trees.

The couple also has plans to expand the menu in the future to serve pastries or light lunch fare. While the Grahams can’t help but dream, he said that for now, “We’ll figure out the ice cream part, get that squared away.”

The Depot at Graham Central Station, 64 Maple St., will be open seven days a week, from 12 p.m. to 9 p.m., with an exepcted grand opening on April 30. They plan to be seasonal, operating until October. 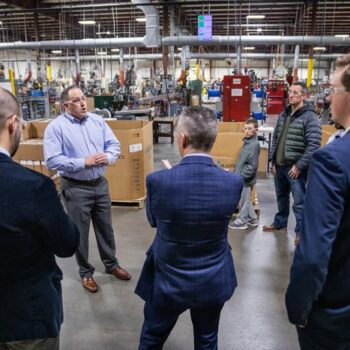 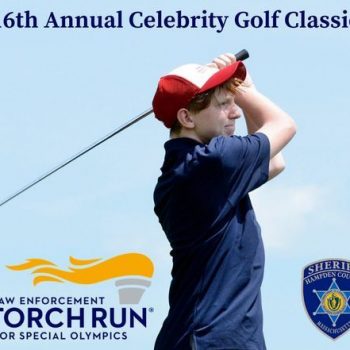